Helming The Maelstrom, much of Heritage Lost is told from the perspective of Katya Cassius. A career military officer in the Res Publica De Magistratus, she has found her career stalled at the rank of captain, but at least, she’s finally received her long-dreamed-of space-faring post with her own ship. The Maelstrom may not be glamorous, but it is hers.

Prior to The Maelstrom, Katya worked primarily in the Magistrate’s military police force, eliminating criminal syndicates, training local law enforcement on troubled worlds, targeting illicit drugs, and breaking up sentient trafficking networks. The planet Reznic pushed her to her limits, especially after a case involving young children occurred (Read ‘The Promise’). Internally, she often feels the only good occurrences from her time on-world were meeting Colonel Valens Ulpius, her secret lover, and Mina, a young girl she takes as her ward, training her as a pilot.

Katya’s own early childhood is largely a mystery, with her memories being a vague, jumbled mess. She was adopted by Faustus Cassius, an archaeologist who hails from a prominent Magistrate family, at the age of three or four. Her homeworld, Mramor, had fallen into chaos following a destructive world war and a serious of radical revolutions. She’s done some research into Mramor but has never dug too deeply out of a combination of loyalty to her adoptive father and a deep fear of what she might find. 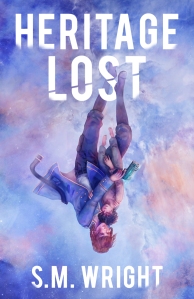 Heritage Lost is now available as an e-book for preoder on Amazon. A paperback version will be available on the release date, Dec. 6. Be sure to also add Heritage Lost to your “want to read” list on Goodreads. For the latest news, also like my author’s Facebook page, where I recently held a live unwrapping of my Heritage Lost paperback proof.

This site uses Akismet to reduce spam. Learn how your comment data is processed.

Support the blog on Ko-fi.